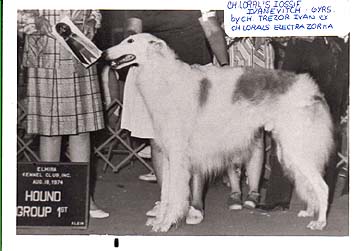 American Ch. Loral’s Iossif Ivanevich played a huge part in the development of the breed in America during the late 1960’s, early 1970’s. Joe was bred and owned by Al and Lorraine Groshans of Loral Borzoi in Pennsylvania.  He was a white dog with apricot markings born April 10, 1967, sired by Trezor Ivan out of Loral’s Electra Zorka.  He became a multiple Best In Show, Best In Specialty show winner handled by either Lorraine or pro handler Jim Rathburn, and was well known for his smooth, far reaching gait and fabulous temperament.  He may have achieved Top Borzoi status, but if not he was awfully close. Joe was one of many from his litter who was wildly successful, but as a sire he had to have topped all of his littermates, producing champion after champion who went on to their own specialty and BIS wins.  He achieved ROMX-C status, and to this day is found behind a very large amount of still active kennels right into the 21st Century.