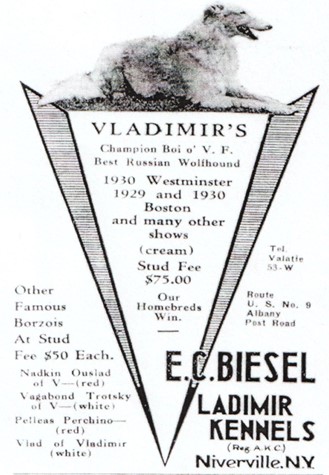 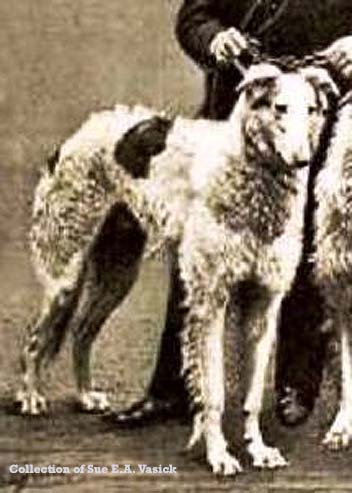 [first published in “Hark to the Hounds”, National Geographic, October 1937]

The Borzoi, or Russian Wolfhound, is not only a hound of great distinction in appearance, but one of the oldest, most carefully purebred of all the European varieties.

Long the pride of Russian rulers, nobles and their ladies, the Borzoi during Imperial times was maintained chiefly for sport coursing the hare, the fox and particularly the wolf. While one dog could easily cope with a fox, at least two strong Borzois were usually needed to hold a wolf by the neck until the chasseur could arrive and deftly muzzle or kill the beast.

About seventy years ago, the then Tsar of Russia presented the Prince of Wales [later Edward VII] with a brace of his favorite hounds, Molodetz and Owdalska [sic], and these were exhibited at English shows.

In 1892, when a highly representative aggregation was exhibited at Crufts show in the Royal Agricultural Hall, London, most of the Borzois were the property of the Grand Duke Nicholas. Others owned by the Tsar included a lovely bitch called Laska and two dogs, Oudar and Blitzray [sic]. Oudar stood 30-1/2 inches at the shoulder and weighed about 105 pounds.

Oudar and Lasca were sold for 200 pounds [$1,000] each and the then Lord Mayor of London was presented with another handsome speciman.  The Duchess of Newcastle purchased some of the Russian exhibits and then added to an already strong kennel of Borzois, provided the leading aggregation of these hounds in Britain, and produced specimens of great size and excellence.

In 1895, when the Princess of Wales was presented with the Borzoi Alex from the Tsar’s kennel, the already rising popularity of the Borzoi was greatly enhanced.  In that same year – 1895 – the Borzoi Club of England was formed at the Albemarle Hotel, Piccadilly, London. The late Duke of Newcastle presided, and to celebrate the event, a prize Borzoi belonging to the Duchess was “christened” with a magnum of champagne. This writer was elected a member of the club’s executive committee. 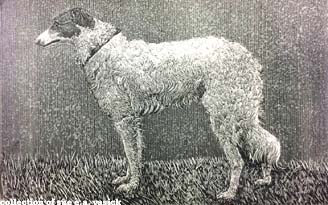 Many of the finest Russian dogs were imported to America, and some outstanding specimens have been exhibited here. Recently the American Kennel Club changed the breed name from Russian Wolfhound to Borzoi, the classification long ago adopted by the Kennel Club of England. “I am glad to see English sporting papers adopting the Russian name for this breed,” Prince Obelenski wrote. “For the word itself [borzoi, masc., borzaya, fem.] means swift and hot-tempered; and though poets sometimes apply the expression to a high spirited steed, it is, with this exception, applied to greyhounds only. For this reason, the English Greyhound is called in Russia ‘Angliiskaya Borzaya’, or English Borzoi”.

The general appearance, height and elegance of the Borzoi at once command attention. He appears the embodiment of speed and strength, and the silkiness and brilliancy of the profuse coat attract lovers of the beautiful. So it is that he is looked upon not only as a sporting dog, but as an elegant companion or lady’s dog.

The color ought to be white, with blue, gray or fawn markings of different shades, the latter sometimes deep orange, approaching red. Whole colors for show purposes are unsatisfactory. Height, males from 29 inches upwards, females from 27 inches.

[Editor’s note: this essay contains a few misspelled names which I have left to honor the integrity of the article]

Where dogs names were gained from published show results, the year refers to the first date the dog was shown.  It is not a year of birth.  For puppies, a guess was made for a birth date in the year before or sometimes in the year the dog was shown.  In this database it was helpful to add the town or state for unknown dogs to give them a location in the vast country of Canada.  Generally the areas are east coast around Toronto, Ottawa etc then the major area in the middle of the country with the states of Alberta, Manitoba and Saskatchewan.  Several breeders in the early years lived here and used their dogs as wolf hunters but showed them as well.  Many of these dogs survive behind modern lines.  The isolated west coast on the other side of the Rocky Mountains has Vancouver and British Columbia with few dogs.  In the early days there were 3 separate kennel clubs which registered dogs in Canada.  For about 5 years the west coast combined with California to create the Pacific Coast group. I do not have any registrations for dogs here but some dogs were imported and litters were bred in Vancouver.  In the Mid West states of Alberta etc, the Dominion Kennel Club was active for several years registering dogs.  These are shown in the database with DKC numbers.  These registrations were published in a kennel magazine in opposition to the Canadian Kennel Club but I don’t have many issues of this magazine so dogs for DKC are mostly missing.  Some dogs were registered with more than one club.  From 1915, all Canadian registrations were done by the Department of Livestock Records until 1984.  Annual studbooks were printed and these are in the 3 libraries in America as well as the CKC.  It is these stud books which need someone to go in and copy the relevant pages.  Most Canadian dogs in this period are missing from the database with some exceptions as a lot of breeding stock went to America.  All the AKC numbers on Canadian bred dogs are for those sent to America and re-registered with AKC in their studbooks.  Some AKC numbers are for American dogs that were sold to Canada and have (Imp USA) at the end of their names.  As many American dogs were shown in Canada to get an extra title but didn’t live there, sometimes it is difficult to tell whether they were just visiting or imported.  These dogs just have (USA) on their names until further information is obtained.

The historical database is interesting for the early years but it also shows the many unknown dogs at the end.  Hopefully one day a lot of this missing information will be discovered. 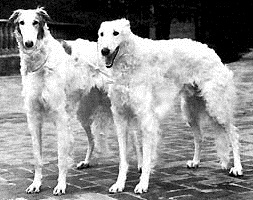 A splendid photograph of two grand Borzoi, American Ch. Sunday of Tam-Boer on the left and American Ch. Vigow of Romanoff III on the right. Sunday was a well-bodied white and red bitch bred by Leonard and Elizabeth Tamboer and owned by the Larsons. She was whelped December 6, 1956 and of Romanoff bloodlines, being sired by Vigow of Romanoff II ex Lady Gretchen of Tam-Boer. As a brood bitch, she produced 2 litters [1960, 1961] both sired by Haljean’s Flame, and her offspring were behind Cordova and Conamor Borzoi, among others. Her most influential daughter was Hasu’s Elena of Conamor, who was the dam of Conamor Count Tauskey [sire of the first Majenkir litter] and Conamor Christoff Cade [sire of Cathcade Curio].

Vigow III was bred by Louis Murr at Romanoff kennel and owned by Mr & Mrs E Leonard. He was a white dog born May 27, 1952, sired by Vigow of Romanoff II ex Baba Yaga of Romanoff, making him linebred on the great Vigow of Romanoff. As a stud, this dog became very important in the continuing development of the breed, as he was the sire of Chudak of Romanoff, along with Black Eyed Susie of Tam-Boer, Vigow of Tam-Boer and Lee-T of Tam-Boer, all who bred on.

These two Borzoi influenced a whole new trend for breeding in America, one that eventually encompassed Borzoi breeding world wide.